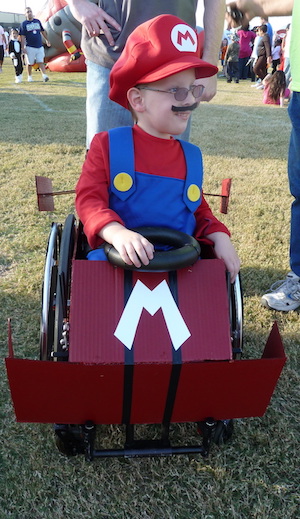 Halloween is less than a month away, so now's the time to be thinking of some creative costume ideas for the festivities. If it so happens that you or someone you know is in a wheelchair, it might just be a great springboard for costume ideas that will be the life of any party.

At first, it seems hard to think of ideas for dressing up when you use a wheelchair, but the key is to realize that this several thousand-dollar machine might just be your greatest asset for some really awesome suits. From the obvious stuff (e.g., racecars, Mario Kart) to the less obvious (phone booth, anyone?), let's take a look at five great wheelchair costumes and the lessons to be learned from them.

Idea:As featured on the blog Epbot, one participant at MegaCon 2014 came up with came up with this idea, turning his chair into the epic Iron Throne from the hit HBO series Game of Thrones.

Lesson learned: There are quite a few TV show and movie characters known for their chairs, providing great ideas for potential wheelchair costumes.

Idea: Caleb McLelland hit Internet fame at the age of five a few years ago with a pic of him dressed up as Mario from the racing video game Mario Kart. With some cardboard, duck tape and other home items, Caleb's mother Cassie came up with this ingenious design and continues making costumes to show on her blog at WheelchairCostumes.blogspot.com.

Lesson learned: Cardboard and paint are magical tools that can turn any wheelchair into an impressive automobile.

Idea: Another MegaCon participant came up with the brilliant idea of fitting a makeshift Dr. Who-style phone booth onto her wheelchair.

For another spin on the phone booth idea, take a look at this kid who turned his walker into a Superman fitting room.

Lesson Learned: The wheelchair (or walker) can be used as a support for extra prompts. Whether it's a phone booth or something else altogether, the possibilities are endless.

The miracle of flight

Idea: It didn't take long for this image to go viral: a kid seemingly flying as Superman. The implementation is surprisingly simple. Cover up the wheelchair with, yet again, cardboard, paint a simple black cityscape, and attach a cape with fake legs underneath.

Lesson learned: Far from being a barrier to great costumes, a wheelchair can help achieve many optical illusions, from human flight to floating ghosts and many other hover-based ideas.

Idea: Kasey Tararuj, a blogger who is paralyzed, turned her wheelchair into the character Chairry from the show Pee-wee's Playhouse. She ended up winning a prize for it that paid for her trip to Vegas!

Lesson learned: A wheelchair is not limited to serving as a vehicle. It can take on potentially endless personifications.

There are a lot of awesome ideas floating around on the Internet for wheelchair adapted costumes. Do you have another unique idea?